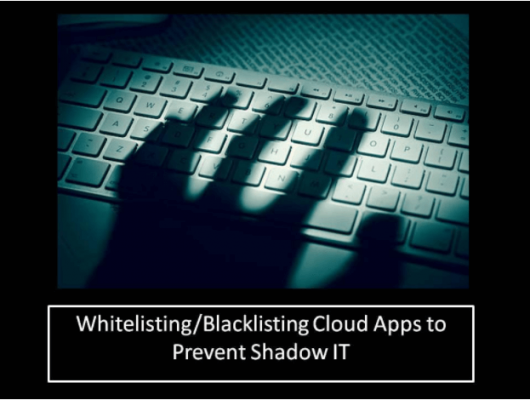 With organizations migrating to cloud services, it has become all the more important that they secure their data with controlled access to the system. Blacklisting and Whitelisting cloud apps come into the picture here. There are technologies to help organizations sort out the list and apps, which admin can bring into undesirable programs that would be restricted for access, come under the blacklisted ones. The index of approved ones can be designed by whitelisting some cloud apps, which are permitted to be present and active on the company’s systems. The goal of both blacklisting and whitelisting cloud apps is to protect the computers and networks from potentially harmful applications and unauthorized access that may affect enterprise security and result in data breaches.

Blacklisting and Whitelisting cloud apps have their own pros and cons; definitely, there is no consensus by experts on which is better. Whitelisting works better in centrally managed environments where the workload is consistent. High-risk environments need that their systems are secure and it is not a priority that there should be software usage without restrictions. Here whitelisting works in their favor which allows only that programming that has been explicitly permitted to run. Also, approved app components like software libraries, extensions, and plug-ins, and configuration files may be indexed in a whitelisting to improve flexibility. But compiling the whitelist initially is a tough task because of the intricacies involved in sorting out the tasks and apps needed to perform those tasks. Managing the list is one more area of hard work to be put in due to the presence of complex interconnections of business processes and applications.

How Does Whitelisting Cloud Apps Work And What Are Its Advantages?

The process of whitelisting apps begins by building a list of approved applications. This can be built into the host operating system or can be provided by a third-party service provider. The simplest form allows the admin to specify file attributes like name, path, and file size associated with whitelist apps and whitelist URLs. Whitelisting feature of an effective CASB solution helps the admin to specify the users that can be allowed to run particular apps. It also restricts users from installing new software and defines which versions are permitted and provides a control for running the software. Whitelisting basically works on the principle of denying all and allowing only what is necessary. While it is true that whitelisting requires a methodical approach, it is worth the time and effort as it proactively protects the system and prevents malicious or unauthorized apps from entering the system and network of the company. But since whitelisted apps are prone to get attacked, they are better in the sense that organizations secure them with cryptographic hashing techniques and digital signatures.

About Blacklisting Apps And Its Effectiveness

Blacklisting is a network administrative practice to prevent undesirable programs from getting executed on the company’s computers and networks. Most of the antivirus software, spam filters, and prevention/detection systems use the blacklisting method as their source program. Blacklisting apps include those that are a security threat and those that are deemed inappropriate within an organization. The list is prepared by noting down those applications that must not access the system and prevent it from installing or running. But given the ever-increasing threats and the variety and complexity involved, a blacklist can never be comprehensive. This decreases its effectiveness. If the company system first allows everything and then identifies and blocks apps that are known to be dangerous then it is inviting trouble with blacklisting apps. With the bloating amount of malware, it becomes necessary that the blacklist remains up-to-date and that the cloud services continue to monitor the threat data from millions of endpoints. This is making the blacklist-based approach lose its effectiveness when compared to whitelisting apps.

Organizations need to be more proactive to ensure cloud security by implementing blacklisting and whitelisting cloud apps and thus prevent unauthorized users from accessing confidential data from the system of the company. This helps prevent Shadow IT from becoming a menace for the company. In short, we can say that, besides all the good that cloud services bring in, it has also left some room for the negative in the form of data leakages, thefts, and breaches; so security measures to protect organizational data is the prime agenda of corporate today, which is efficiently taken care by the efficient CASB solutions of Cloud Access Security Brokers.