Moving ERP to The Cloud Environment – Is It A Correct Business Decision? 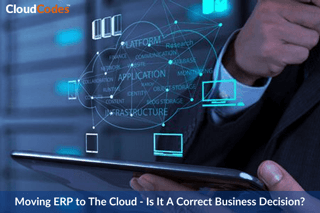 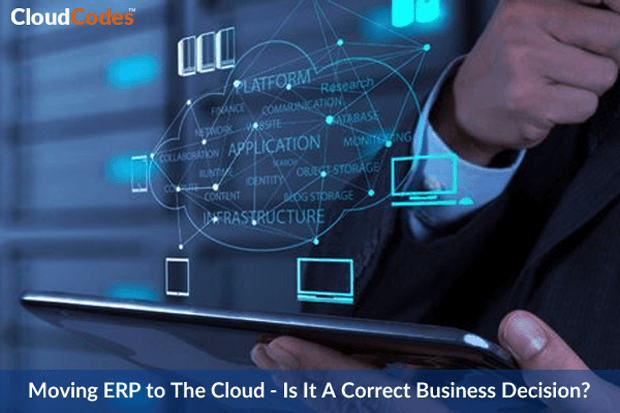 Companies are attracted towards online ERP software because it provides scalability and security patch automation within it. However, compliance risks and hurdles while moving confidential information online are still a major concern. Today in the CloudCodes post, we are going to show enterprises a correct direction when they make the decision of moving ERP to the cloud. So, let’s begin with the same!

Almost two-third of industries are making a plan to migrate an ERP (enterprise resource planning) system to the cloud or had already done this. Several companies put forward their different concerns regarding moving of sensitive content, security, and regulatory compliance. when they make the decision of moving ERP to the cloud. These statements are concluded by Cloud Security Alliance, which had taken a survey from 200 industries about their enterprise resource planning migration strategies. As per the report was given by CSA, organizations denote a small part of the large market – companies will spend US$30 billion on the cloud ERP machines in the year 2021 and around US$266 billion on the public online services.

The most common reason due to which people prefer moving ERP to the cloud is scalability. This has been stated by 65% of respondents, followed by the lower ownership cost i.e., 61%, and 49% security patching and updating by the vendors.

Moving confidential information on cloud gave companies the longest pause for thought – 65 percent referred it among their big concerns when it is about moving ERP to online. Companies have to re-architect their machines for the cloud platform to utilize online native migration products. This offers access control and data encryption in rest as well as transmit mode. The entire scenario eliminates the fastest method of getting a burden into the cloud, shift and lift, which would easily perpetuate existing issues with patching and access controls.

Enterprises who wish to shift their ERP systems online have more work for designing ahead of them than just mentioning the types of server instances and the storage they wish. Cloud data security concerns were raised by 59% of respondents, despite some prove that protection in the cloud could be an improvement over that of on-premises machines. The security risk for companies is not the cloud only but, their own standards, technologies, and configurations. This gives the IT industry a warning that 95% of Cybercrimes are the fault of customers. Talking about system security, enterprises, on the whole, are confident regarding the same. The reason behind this is that ERP software gives them confidence when it is to secure confidential information. Remaining 5% of the respondents reported an average of 3.8 protection breaches each over preceding two years.

Cloud security alliance asked companies regarding protection tools securing their online ERP apps. IAM (identity and access management) was in use by 68% of them, security firewalls by 63%, vulnerability assessments by 62%, and intrusion detection and prevention systems by 59%. Only thirty-eight percent of the respondents used SIEM (security information and event management) system and around 29% used cloud access security broker. Other issues when it is about moving ERP to the cloud comprises of compliance risks (54%), disturbance to company’s operations caused by the migration procedure (47%), and the overall time consumed in data migration (46%).

Does the Delays Occur While Moving ERP to the Cloud?

Companies have a good point to worry about the delays when they decide to shift their data – 90% of CIOs already had experienced data migration projects. They don’t prefer towards going on the planned things due to the complexity of data while moving from on-premises to online. Only the quarter amount fulfills their defined deadlines for such data migrations, with the average data migration taking 12 months. Those who missed the deadlines hide two fields of concern for CIOs – the hurdle of accurately estimating how large data migrations will acquire and the total number of unexpected issues they might encounter along the way. Companies moving ERP to the cloud have to make a strategy for the worst too, and ensure that their ongoing company would not be impacted if in case of delay occurs.

Moving ERP to the cloud is a good decision to proceed with. Although for this, companies have to suffer from some delays, these delays are for a good cause. One can take help of third-party service providers who guides their clients in moving the ERP software to the cloud without interrupting regular work. Spending your efforts and time for a good reason is of complete worth only if the result is excellent. So, be conscious while you make any decision regarding your business growth!